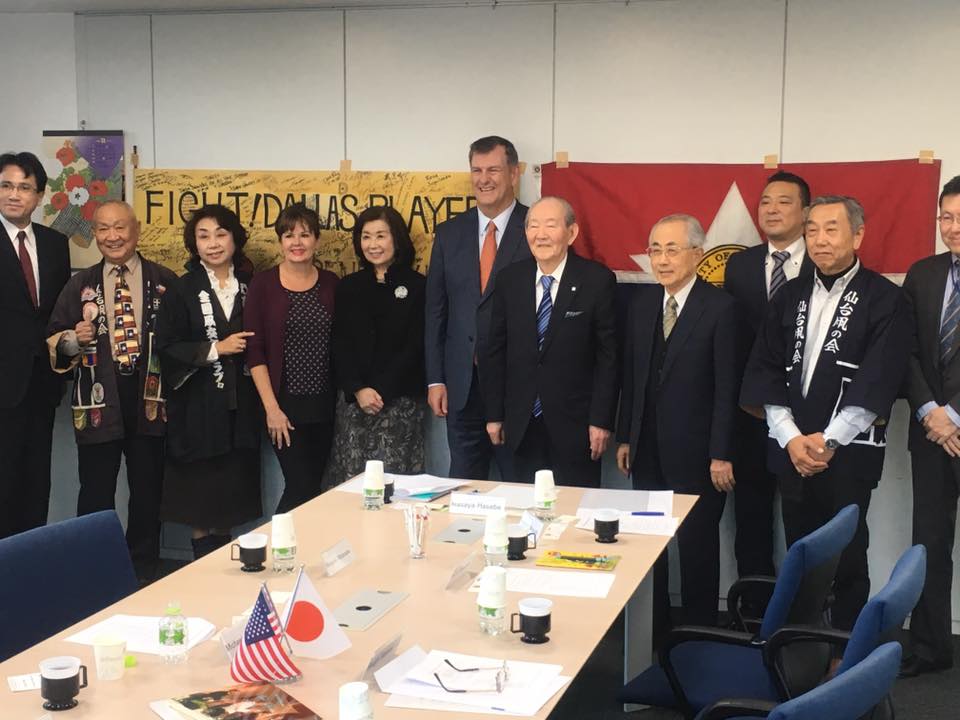 In 1991, the Japan American Society in Dallas (JASD) formed the Dallas/Japan Sister Cities Committee and began the search for a Japanese sister city. The committee quickly selected the city of Sendai, and after several visits by representatives from both cities, the agreement proceeded. Dallas and Sendai enjoyed a number of exchanges long before the International Sister Agreement was officially signed in 1997, and there have been a number of business partnerships created between the two cities since 1991. The Sendai relationship is currently Dallas' most active sister city relationship, with two exchange programs each year and a number of other events.

Mayor Rawlings visited Sendai during his November 2016 trade mission to Tokyo and Hong Kong. During his time there, he met with Mayor Emiko Okuyama and Vice Mayor Yukimoto Ito. Mayor Rawlings also toured the Great East Japan Earthquake and Tsunami area. A small delegation from Sendai visited Dallas in December 2016 to observe the Dallas Marathon, with plans to send a team of runners to participate in 2017. During their visit, there was also a meeting with the Dallas/ Sendai Sister Cities Committee to discuss plans for the upcoming 20th anniversary of the Dallas/Sendai relationship.

Young Ambassadors
In an ongoing exchange program, Dallas and Sendai take turns sending student delegations to visit each other in alternate years.  Students experience home life with host families, visit local schools and government officials, learn about local history and culture, and enjoy shopping, sightseeing, and making new friends. In 2016, 6 high school students from Dallas visited Sendai for a week-long exchange at the end of June.

Sports Exchange
Since 1996, Sendai has invited Dallas to send a team of runners to participate in the Annual Sendai International Half Marathon. The purpose of the event is to promote international friendship and exchange through sports. The delegation from Dallas typically includes 2 participating runners and a representative from the Dallas/Japan Sister Cities Committee.

2011 Tohoku Earthquake and Tsunami
On March 11, 2011, a 9.0 earthquake and subsequent tsunami hit the Pacific coast of the Japanese island of Tohoku. Sendai, the largest city in the region, was deeply affected, with major damage to the coastal area. Following the earthquake, hundreds of donors in Dallas/Fort Worth collected over $187,000 for the Sendai Relief Fund. These funds were donated to Lions Club International for rebuilding the Mori no Sato nursing facility in Sendai, which reopened in 2015.
programs
Small Business
International
Redevelopment
Office
Retail
Address
1500 Marilla St, Room 6DN
Dallas, TX 75201
Contact
Connect With Us
Call Us
Main Office: 214-670-1685