The City of Dallas has worked to build Sister & Friendship City relationships around the globe. These relationships help create and strengthen partnerships between Dallas and the international community. The program aims to build global cooperation at the municipal level by promoting cultural understanding and stimulating economic development between Dallas and its foreign counterparts. 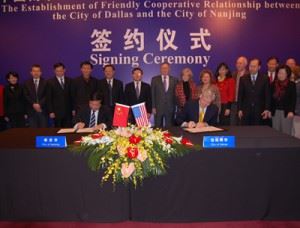 Sister cities since 1991, Brno is the second-largest city in the Czech Republic and regional capital of the South Moravian Region. It is an educational powerhouse with 86,000 students at 14 universities.
Learn more.

At the heart of one of the People's Republic of China's largest industrial areas, Dalian is located along the Yellow Sea on the Liaodong Peninsula. Dalian became a Friendship City with Dallas in 2009.
Learn more.

Capital of the Côte-d'Or département and of the Bourgogne-Franche-Comté region, Dijon is home to over 150,000 people in eastern France. The relationship between Dijon and Dallas dates back to 1957 and was started by Stanley Marcus, founder of Neiman Marcus.
Learn more.

The closest of Dallas' sister cities, Monterrey is one of the largest business centers in Mexico and the heart of the nation's third-largest metropolitan area. Dallas and Monterrey began a sister city relationship in 1988.
Learn more.

Located along the lower Yangtze River, Nanjing has at times served as the capital of China. Home to 8 million residents and one of the world's largest inland ports, the city added friendship status with Dallas in 2009.
Learn more.

Officially a friendship city with Dallas since 2008, Qingdao is a major seaport and industrial center on the Yellow Sea. The city is home to major consumer appliance companies such as Haier and Hisense.
Learn more.

The largest city in the Baltic states, Riga is home to a large seaport on the Gulf of Riga. The city is renowned for its Art Nouveau architecture and is increasingly a major tourist destination. Dallas and Riga became sister cities in 1986.
Learn more.

Joined with Dallas in a Sister City agreement in 2004, Saratov is home to over 800,000 residents on the Volga River. A major manufacturing center in southern Russia, Saratov is also a major educational and scientific research center.
Learn more.

Sister cities with Dallas since 1997, Sendai is the capital city of Miyagi Prefecture and home to over 1 million people. After the horrific earthquake and tsunami in 2011, the citizens of Dallas provided assistance to its partner as part of the long recovery.
Learn more.

The capital city of the Republic of China (commonly known as Taiwan), the city is home to over 2 million residents in a region of 7 million. Taipei and Dallas became sister cities in 2006, and regularly exchange delegations.
Learn more.

Established as a Sister City with Dallas in 1995, Tianjin is the fourth-largest city in the People's Republic of China. The seaport gateway to Beijing, Tianjin is home to a metropolitan population of over 15 million people.
Learn more.